Our research programme focuses on understanding the molecules that control cell division, with the aim of defining targets for intervention in cancer or other diseases of cell proliferation. Our research depends heavily on imaging cells and tissues to directly measure how molecules function in a biological context, so we also develop open source software for managing and mining multi-dimensional imaging datasets. 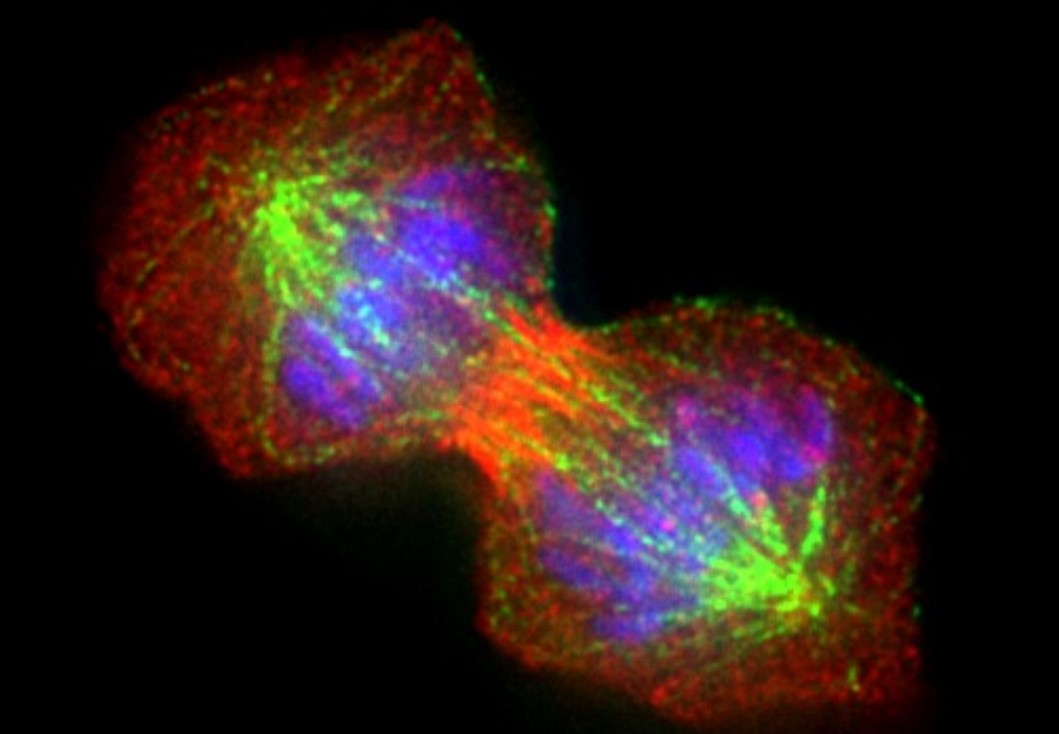 During cell division, the two copies of a cell’s genetic material are completely separated and delivered to a pair of new daughter cells. Proper chromosome segregation requires the formation of correct attachments between the genetic material, assembled into chromosomes, and ends of microtubules. Our research is focussed on establishing the molecular mechanisms that mediate and monitor the correct attachment of chromosomes to microtubule at a special structure known as the kinetochore. To achieve this, we make use of advanced tools for imaging the molecular machinery of cell division. Recently, we used these tools to discover a new protein, Bod1, that plays a critical role in the formation of correct attachments between microtubules and chromosomes by binding to and regulating the activity of the critical signalling molecule, Protein Phosphatase 2A. We and our collaborators have recently discovered that Bod1 also plays a critical role in the nervous system, and controls neuronal function in Drosophila and humans. We are now taking forward these findings using inducible pluripotent stem cells, to fully define the broad range of Bod1’s roles in critical cellular functions.

We also have a close, long collaboration with the Rocha and Lamond Labs where we are defining how prolyl dehydroxylases (PHDs) control the assembly and function of the mitotic spindle. We have discovered that a critical component of the centrosome, CEP-192, is a substrate of PHD1 and that CEP-192’s stability and function at the mitotic centrosome is controlled by prolyl hydroxylation. Our continuing work has identified several other molecules that control assembly and progression of the mitotic spindle that are modified by PHDs.

Like many cell biology labs, we generate large sets of image data as part of our experimental strategies. To manage, analyse and understand this data, we, along with our collaborators, formed the Open Microscopy Environment Consortium. OME develops and releases:
— The OME Data Model, an open data specification for multi-dimensional imaging
— OME-TIFF, an open file format for storing multi-dimensional images
— Bio-Formats, an open source software plug-in that enables access to multi-dimensional images written in >145 formats from many imaging domains, including light and electron microscopy, high content screening, digital pathology, medical imaging and astronomy.
— OMERO, an open source, scaleable platform for image data access, management, analysis, sharing and publication.

OME’s software is included in Fiji, can be used with Matlab and R, and is the foundation for several image data publication systems including the JCB DataViewer, the LINCS Database Library, and the Euro-BioImaging Image Data Repository. For more info on OME, see the Consortium’s web site.