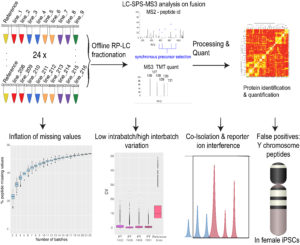 By analysing data from a large-scale proteomic study of human iPS cell lines, involving 24 separate 10-plex TMT experiments, they showed that there is a significant inflation rate of protein missing values as multiple batches are integrated and further showed that this pattern is aggravated at the peptide level. They identified normalisation strategies that can be used to address these batch effects, thereby improving the precision of quantitation when data from multiple TMT batches are integrated.

Brenes et al. used an analysis of peptides encoded on the Y chromosome as an internal control to characterise the incidence of false positives in multiplex TMT experiments, where iPS cell lines from both male and female donors were compared within a single 10-plex TMT batch. While Y chromosome peptides should be absent from female lines, nonetheless, these Y chromosome-specific peptides were consistently detected in the female donor channels of all TMT batches. The same Y chromosome specific peptides were then used to quantify the level of ion co-isolation, as well as the effect of primary and secondary reporter ion interference. The resulting data were used to propose solutions to mitigate the limitations of multi-batch TMT analyses. This included use of a common reference line to normalise data reliably across the batches and deduced experimental designs that minimise the effect of cross population reporter ion interference.