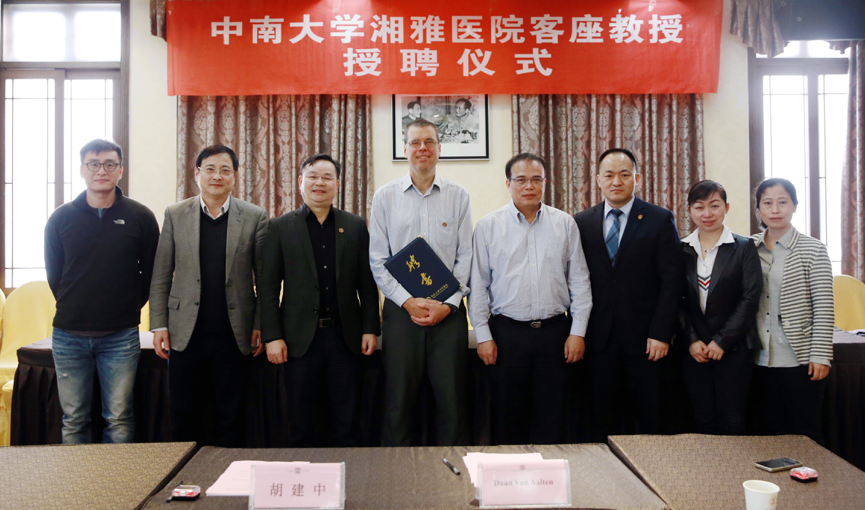 The University of Dundee has formed a new link with China, with Professor Daan van Aalten from the School being appointed a guest professor at Xiangya Hospital at Central South University in Changsha, China.

Professor van Aalten is a Wellcome Trust Investigator in the Division of Gene Regulation and Expression in the School of Life Sciences. He is one of the world’s leading authorities on the role of the enzyme O-GlcNAc transferase in neurodevelopmental and neurodegenerative diseases.

He is an author on over 170 scientific papers, the latest being a major breakthrough in identifying the structure of PINK1, a key enzyme that protects the brain against Parkinson’s disease.

“I am honoured to receive this guest professorship from Central South University and to be part of the developing links between Dundee and China,” said Professor van Aalten. “There are exciting possibilities for greater research collaboration between our institutions.

“Our work has taken us in the direction of understanding a gene that is mutated in patients with a range of brain diseases and this guest professorship at Xiangya Hospital at CSU will help us look at these mutations in a larger population and collaborate with scientists there to understand their effects.”

Professor van Aalten is a winner of the prestigious Lister Prize (2006) and a Fellow of the Royal Society of Edinburgh.

He will be a guest professor in the Institute of Precision Medicine, a key laboratory of Hunan Province at Xiangya Hospital of Central South University.

Zhang, Zhuohua, Director of the Institute of Precision Medicine, said, “Glycans are involved in every area of biomedical sciences. Having an internationally recognised expert to consult, to collaborate and to discuss with will dramatically improve our ability to recognize the importance of glycans scientifically and clinically. In fact, glycobiology is a field rarely studied in China. I am sure that having Professor van Aalten as our guest professor will promote Xiangya’s presence and research in this field in China.”

Xiangya Hospital is one of the highest-rated general hospitals in China. It was founded in 1906 by the Yale-China Association, and is recognised as “South Xiangya”, the best hospital in southern China. The hospital has 3,500 beds, 88 clinical departments, and serves a population of more than 100 million.

Wendy Alexander, Vice-Principal (International) of the University of Dundee, said, “We are delighted to welcome Daan’s guest professorship and his close working with Professor Zhang Zhuohua and the Institute of Precision Medicine. A delegation from the University of Dundee, including our Principal, Professor Sir Pete Downes, had the pleasure of visiting Central South University this week, meeting with both their Chancellor and President to discuss how we might deepen our research and teaching collaboration.”

Dr Kim Dale, Associate Dean (International) in the School of Life Sciences, said, “The University of Dundee has had a relationship with CSU in Hunan province since 2009. Over the years we have recruited engineering students via a 3+1+1 articulation and the collaboration has recently extended to now include a 2+2 articulation in Life Sciences, with the first students through this route expected to arrive in Dundee in September 2018.”

Uncovering the genome sequence of the water yam orphan crop